It was a carnival atmosphere in Leeds on Wednesday 28th September when people took to the streets to celebrate the achievements of Yorkshire’s Olympians and Paralympians during a city centre parade. Leading signs and graphics supplier, Signs Express (Leeds), was commissioned by Welcome to Yorkshire to add striking branding to the five buses used during the welcome home parade.

The event was organised by Welcome to Yorkshire, in association with Leeds City Council and supporting partners including Yorkshire Water, Slingsby, Yorkshire Tea, Vale of Mowbray and Radio Aire; all businesses looking to show their support of the region’s athletes successes. The buses, usually used for sightseeing tours and general bus hire, needed to be temporarily branded for the event and so it was important that Signs Express (Leeds) fully covered any existing graphics with block-out vinyl whilst also taking care to use the design to create an impactful and eye-catching result. 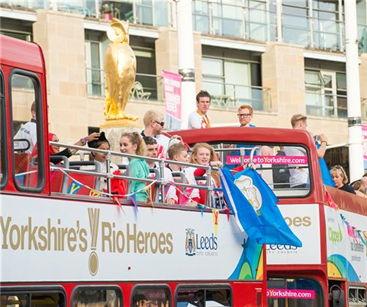 The medal winning athletes during the Leeds parade

Sir Gary Verity, chief executive of Welcome to Yorkshire, said: 'Wow, what a welcome for our Yorkshire Rio heroes. Tens of thousands of people lined the route around the city centre to cheer on our athletes and it really has been an event to go down in history. Yorkshire, you really know how to party.” The parade commenced at 5.15pm and a host of the region’s athletes appeared including:

With viewing spots available right along the route, which began outside Leeds Art Gallery, those in attendance had the chance to cheer and see up close their Yorkshire Rio Heroes in different areas and locations of the city centre. Signs Express (Leeds) centre owner David Nurse said, “After the most successful Olympics and Paralympics in our country’s history, with many of the medal winning athletes coming from this region, it’s fantastic that Welcome to Yorkshire has organised such a great homecoming. We were delighted to receive the commission for the bus graphics and the design certainly provided the finishing touches to what was a fantastic parade.” Signs Express has been established for over 10 years in Leeds and is itself an award winner, recognised for its business practices and signs and graphics expertise.