Home / News & Blog / Convention shows all the Signs of Success

The company’s annual conference had record attendance and number of supplier sponsors showcasing their latest products. The event held on the 25th November at Heythrop Park in Oxfordshire, kicked off with speeches from key members of the management team demonstrating the fantastic progress towards the company’s vision to 2020, followed by a special exhibition of the network’s supply partners. Included amongst these supply partners were three headline sponsors, Metamark, Papergraphics and SignFab who put together special workshops to showcase their newest and best products. The evening event celebrated the talent and dedication of the Signs Express Franchisees and their staff. The evening was topped off with the announcement of Franchisee of the Year Award winners, Thomas and Anne Somers of Signs Express (Lancaster)! Following the flood of their unit in December 2015, when Storm Desmond forced the river Lune to burst its banks, Thomas and Anne stayed calm, setting up temporary offices and not allowing the business’ workflow to be affected. The couples’ quick thinking and the team’s dedication meant that they were back in the centre by February, and 2016 has been one of their best years on record! Moreover, Thomas raised just over £3,000 by completing the 977-mile LEJOG bike ride for the British Paralympic Team. In short, Thomas and Anne were well deserving of the title of Franchisees of the Year 2016. 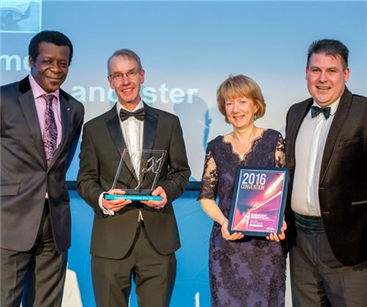 Thomas and Anne Somers receiving their award
The network’s best signage projects were voted for by the sign company’s franchisee network and the awards were presented to the winners by Stephen K. Amos, alongside Craig Brown, managing director of the Signs Express network. Awards were presented to Signs Express centres in Harlow (Best Vehicle Graphics), Manchester (Best Interior), Central Lancashire (Best Exterior), Glasgow (Best Project & Most Unusual Design) and materials supplier Metamark won this years’ best supplier award for the third-year running. Following the Sign Awards, the Franchise Awards were presented to those people who have done extraordinary things in their businesses. This year’s Driving Performance award was won by Ken Venables, owner of Signs Express (Norwich), who took over the flagship store in 2014. He has built a strong team and almost doubled turnover in a short period of time. 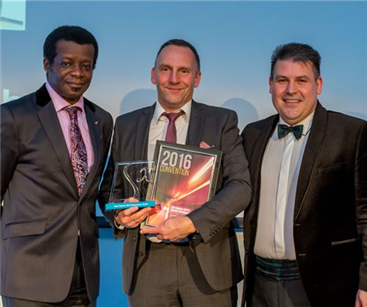 Ken Venables receiving his Driving Performance award
The Newcomer of the Year Award, went to Signs Express (Stoke-on-Trent) owner, Craig Tiley, who took over the long-established Signs Express centre in 2015 following a career in army logistics. Through investments in equipment, staff and the renovation of the production centre, Craig has grown his business substantially with a raft of new customers. 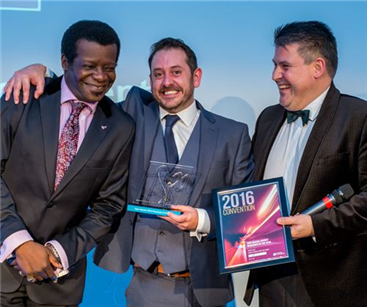 Craig Tiley receiving his Newcomer of the Year award
Employee of the Year was awarded to Louise Alford, apprentice at Signs Express (Lincoln) who has had a long relationship with the centre, having done her work experience there. Since Louise has been an apprentice in the business, it has gone from strength-to-strength and so has she, taking on some of the responsibilities of the Assistant Manager and helping the business experience its best ever year. 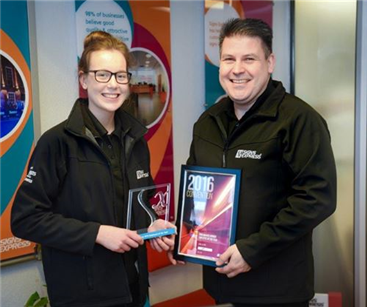 Louise Alford with Craig Brown, MD
Participants in the Convention also helped to raise £1,000 for the Signs Express charity of the Year, NDCS (National Deaf Children’s Society). Craig Brown, managing director of Signs Express Ltd commented, “We hold the Convention every year so our franchisees can catch up with one another, key suppliers and the progress/future plans of the Franchise Support Centre. This year, the event has been bigger and better than ever, which reflects both the atmosphere in the Signage Industry at the minute, as well as our growth as the leading signs and graphics compan