The UK’s leading signs and graphics company, Signs Express Ltd, have marked the conclusion of their 25th year in franchising with record network expansion, record network sales and a management buy-out designed to further drive the growth of the business.

The MBO has been led by Jonathan Bean, who has worked for the UK’s largest signs and graphics franchise for over 13 years, most recently as Finance Director, and who will take the role of Managing Director of the market-leading brand from 1st January 2018. Craig Brown, who has been a joint shareholder and Managing Director since 2007, has worked for the company since its inception in 1989 and will exit the business to pursue other personal and business interests. Jonathan will lead a board of directors which include Network Development Director, Aaron Davis, who joined the business a year ago from Accenture, and Chairman, Carl Fisher, of CF Consulting. They are also supported by Marketing Director, Ed Guichard, who has recently joined the business from Norwich City Football Club, and experienced specialist consultants IT Director, Mark Poole, and Commercial Director, Mark Harvey. 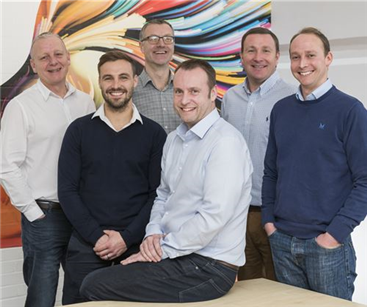 The Signs Express Board

On the MBO, Jonathan said, “2017 has been a remarkable year for the business. We’ve proudly celebrated our 25 years in franchising and marked that milestone to help us achieve incredible growth in our network. Consequently, our trading has been exceptionally strong with our third successive record year. All of this adds up to a fitting tribute to Craig’s tenure as Managing Director and both I, and the board team, are really excited about building upon that legacy.” The most recent MBO follows a two-year plan which has seen huge investment in infrastructure and support services for the Signs Express network, led by the Norwich based franchise support team. The business’s 2020 vision, which will see the brand reach 80 production centres, is well on-track with nine new franchisees on board in 2017 and new branches planned throughout next year. On his departure from the business, Craig Brown said, “I am delighted to announce this MBO and to now help transition the ownership of Signs Express to a hugely talented management team. I genuinely believe I will be leaving the business in much better shape than when I took the role of Managing Director and is poised for a really exciting future.” Signs Express was established in Norwich in 1989 and is now the UK’s largest sign franchise, with 66 franchises across the country. The company was founded with the specific aim of offering a professional one-stop-shop for business signs and graphics. Following a successful pilot from their custom sign production centre, the company began franchising in 1992 and now has a support team of over 20 people offering advice and guidance to the nationwide network of franchisees.

Effective Exhibition & Display solutions are a great way to spread the message about what your business does and who you are.